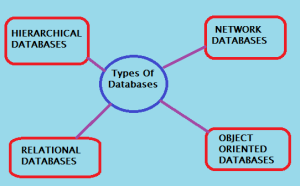 The Hierarchical databases is the oldest of the database models, and unlike the other data models, does not have a well documented history of its conception and initial release. It is derived from the Information Management Systems (IMS) of IBM in the 1950’s and 60’s.
It was adopted by many banks and insurance companies who are still running it as legacy systems to this day. Hierarchical database systems can also be found in inventory and accounting systems used by government departments and hospitals.

As its name implies, the Hierarchical Database Model defines hierarchically-arranged data.
Perhaps the most intuitive way to visualize this type of relationship is by visualizing an upside down tree of data. In this tree, a single table acts as the “root” of the database from which other tables “branch” out.
In this system, relationship are thought of in terms of children and parents such that a child may only have one parent but a parent can have multiple children. Parents and children are tied together by links called “pointers” (physical addresses inside the file system). A parent will have a list of pointers to each of their children.

The Network database model was first introduced in 1971 by CODASYL Data Base Task Group and because of this is sometimes called the DBTG Model. The concept of the network model comes with the idea of IDS (Integrated Data Store) database.
It is called the Network Model because it represents the data it contains in the form of a network of records and sets which are related to each other, forming a network of links.
The network model is not commonly used today to design database systems, however, there are a few instances of it being used by companies as part of a legacy system. Because it represents data in a format closer to the way in which it stores it than the other models, it can be faster than relational systems. Unfortunately, this increase in speed is at the cost of its adaptability.

The Relational Model is the data model which is based on the relational algebra of mathematics. It was first outlined in a paper published by Ted Codd in 1970. It is used by the majority of business community today.

The relational model is based on Set Theory and Predicate Logic. Relational databases try to hide as much of the implementation detail from their users as possible.
The use of set theory allows data to be structured in a series of tables, which have columns
representing the variables and rows that contain specific instances of data. These tables are
organized using Normal Forms.

A traditional relational database does not store procedures, but in addition it attempts to make the data it stores completely Independent from the procedures that access it.
In contrast, an Object-oriented database (OODB) stores objects. An object consists of data
accompanied by methods, which implement the actual procedures that process the data.
The following are the few terms associated with object technology:

So this was a brief information about types of databases. Do write your comments if I have missed out on some important points.
Thanks for reading.